Proclaimed as one of the torchbearers of rock music in the 21st Century, Daughtry lives up to this stature by consistently unleashing new music and keeping the band visible through concert tours. Daughtry is blazing trails along the concert circuit once more in support of his latest album "Dearly Beloved". Joining Daughtry on this massive tour block are seminal rock giants namely Sevendust, Tremonti, and Travis Bracht, and they are gearing up for a fiery performance at the Murat Theatre on Friday 19th November 2021. If you and your squad are raring to raise your fists and bang your heads for this explosive rockfest, then arm yourselves with tickets. Save the date and book your tickets now! 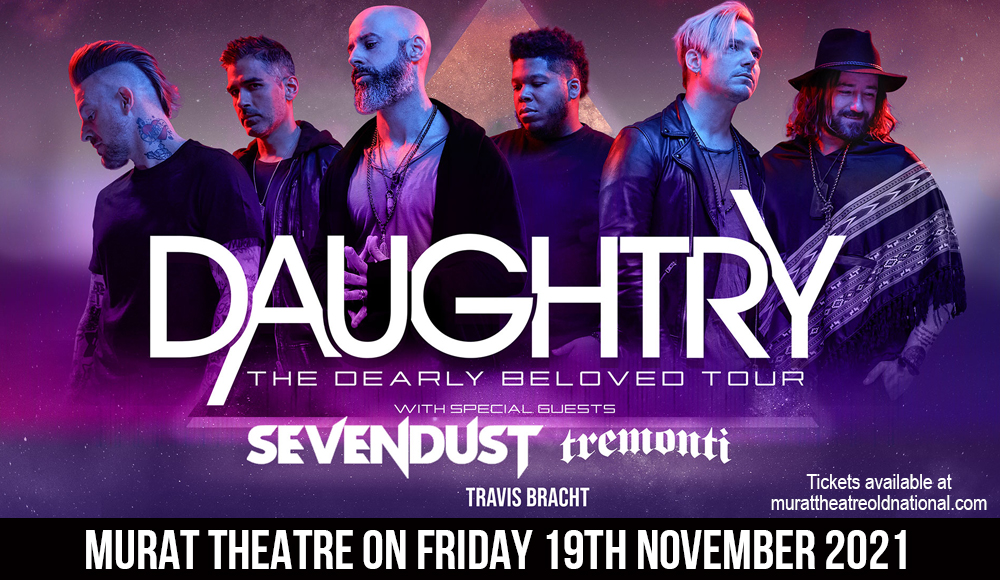 Chris Daughtry is one of American Idol's most successful alums. After placing as a top-four finalist on the fifth season of American Idol, it was clear where he was headed after leaving the idol stage. Yes, Chris Daughtry fronted a band with his namesake and took them to the top of the Billboard charts. Their eponymous debut album released in November 2006 zoomed up the number one spot on the Billboard 200, selling over six million copies in the United States, and has been certified sextuple platinum by the RIAA. The album became the fastest-selling debut rock album in Nielsen SoundScan history, hence it was declared the best-selling album of 2007 by Billboard. The album produced four top 20 hits on the Billboard Hot 100, including top-five hits "It's Not Over" and "Home".

Daughtry solidified his rock artistry when the band was also nominated for 4 Grammy Awards and won 4 American Music Awards and 7 Billboard Music Awards including Album of the Year. Subsequent albums Leave This Town (2009), Break The Spell (2011), Baptized (2013) and Cage To Rattle (2018) also took positions high up the music charts, grabbing the top 10 spot and all getting Gold certifications. Daughtry has sold over 9 million albums and over 25.6 million digital tracks in the U.S. to date.

Daughtry is a big concert draw, and shows are usually selling out fast. No time to waste on this one. The quickest way to book tickets is by clicking the 'Get Tickets' link on this page. Act fast, this is a hot one!