'Tis the season to be jolly as contemporary Christian radio station K-Love, brings together onstage an esteemed line-up of contemporary Christian music artists. K-Love's "Christmas Tour" has become a Christmas holiday tradition that not only fills the air with Christmas hymns but songs that give praise and worship to the reason for the season. The K-Love Christmas tour this year will feature a stellar line-up, top-billed by Casting Crowns, Mac Powell, CAIN, Dante Bowe & Jordan St. Cyr. Round up your family, friends, and loved ones at the Murat Theatre on Tuesday 7th December 2021 to celebrate the most wonderful time of the year. Avoid the holiday rush; book your tickets now! 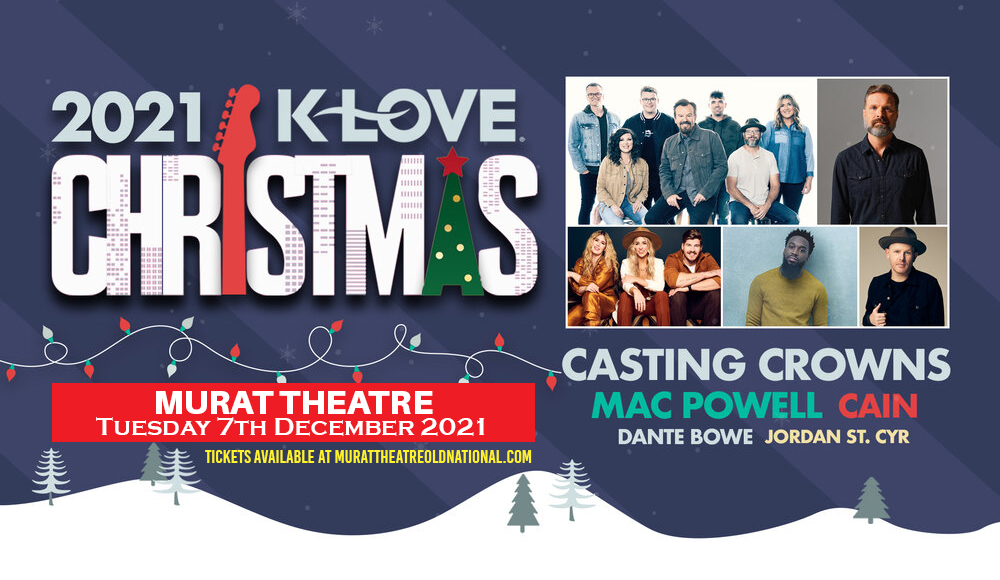 K-Love began airing in 1982, filling the airwaves with full-time / purely Christian music. Their listenership has grown over the years, registering over 12 million listeners online and on the FM band. The radio station also expanded its programming to include music events. The K-Love concerts are one of the most anticipated events of believers of the Christian faith as they bring together inspirational and spiritual songs that bring hope, positivity, encouragement, and envigorate the faith. K-Love Christmas Tour is one of their most awaited events of the year, as contemporary Christian music artists sing praise and worship songs that celebrate the Christmas season.

This year K-Love is bringing together yet another exemplary line-up. Headlining the event will be Christian rock band Casting Crowns. They are known for their eponymous album, Casting Crowns, which was released in 2003, and became one of the fastest selling debut artists in Christian music history. A certified platinum seller in 2005, the album continued to make waves up to 2011, as the group received their first gold certification for the single 'Who Am I'. Casting Crowns were recipients of a Grammy and a Dove Award, and has sold over 10 million records worldwide.

The K-Love concert also features Dante Bowe, a singer, songwriter, and worship pastor from the Bethel Music collective and the Maverick City Music collective, and serves as a worship pastor at Addereth Church in Columbus, Georgia. Bowe is best known for his sophomore album "Circles", which contained the hit single "Joyful". The debuted at No. 7 on Billboard's Top Gospel Albums chart in the United States. Originally from the Christian rock band, Third Day, Mac Powell joins the stage as a solo artist. Powell is one of the most admired Christian acts, as he won the 2002 Gospel Music Association award for "Male Vocalist of the Year". Manitoba, Canada-based artist/songwriter, Jordan St. Cyr completes the K-Love Christmas tour lineup. Airplay for his debut single "Fires" spread like wildfire on the radio airwaves, so to speak, as it hit 7.7+ million people a week; while appearing on the Billboard Christian Airplay charts for 45 weeks and climbing to the top 5 chart positions.

Spread the love and warmth of Christmas. Give your friends and family some K-Love Christmas cheers!