Six-time Billboard World Album Artist of the Year award-winners and Grammy-nominees Celtic Woman bring the luck of the Irish to Murat Theatre on Friday 3rd June 2022 on the Postcards from Ireland Tour! The vocal four-piece bring angelic voices and stunning harmonies to the stage, accompanied by traditional Irish dancers and musicians, but in a thoroughly modern production that will blow you away! Story meets song in this stunning show that transports the audience to magical Ireland for an evening like none other! 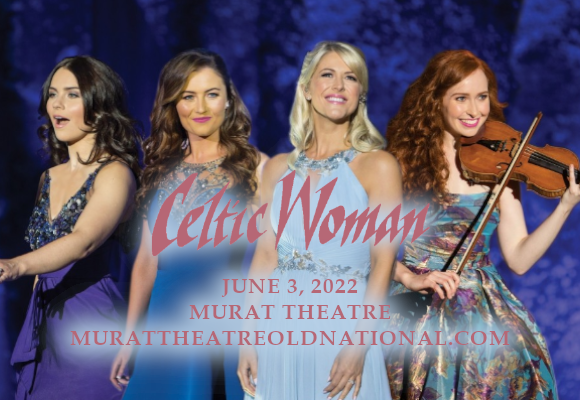 Formed in 2004 and originally comprised of vocalists Chloë Agnew, Órla Fallon, Lisa Kelly and Méav Ní Mhaolchatha, and fiddler Máiréad Nesbitt, Celtic Woman is an all-female Irish musical ensemble  conceived and created by David Kavanagh, Sharon Browne and David Downes (former musical director of the Irish stage show Riverdance). Currently consisting of Chloë Agnew, Tara McNeill, Megan Walsh, and Muirgen O’Mahony (who joined in 2021), the group marries traditional Irish music with contemporary production values. The group was initially formed for a one-time event held in Dublin, Ireland, but after it was aired multiple times on PBS, the group’s popularity grew. To date, Celtic Woman has released eleven albums and sold over nine million records worldwide. The group has won Billboard World Album Artist of the Year six times and was nominated at the 59th Grammy Awards in the "Best World Music Album" category for the album Destiny (2016). The group’s four vocalists are accompanied on their world tours by traditional Irish instruments, such as the bodhran, tin whistle and uilleann pipes, as well as Irish bagpipers, and Irish dancers.