The main mommy himself Tom Segura comes to Murat Theatre on Saturday 11th June 2022 as part of the second leg of his absolutely ginormous I'm Coming Everywhere Tour! (Folks, he really is…!) The Water Champ himself will bring brand new material to the stage, full of his acerbic and pithy observations, couped with his second-to-none storytelling skills! When it comes to engaging, relateable, and daring stand up, you can't get better than Segura! 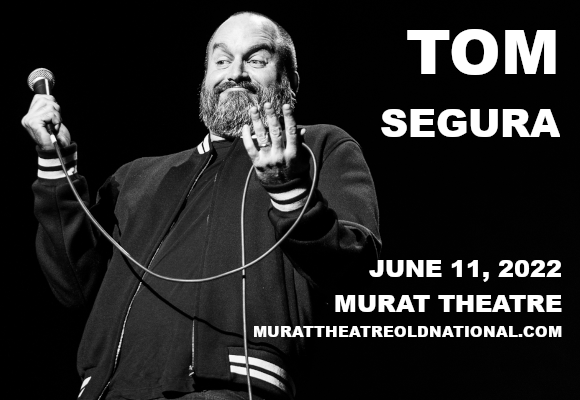 Cincinnati-born stand-up comedian, writer, actor, and podcaster Tom Segura has been a fixture on the comedy circuit since graduating Lenoire-Rhyne University in North Carolina and moved to California to begin his stand-up career. At 25, in 2004, he was a regional finalist on season two of NBC’s Last Comic Standing, where he began to build a mainstream following. His 2007 feature on Live at Gotham and 2011 feature on Comedy Central Presents both introduced him to an even wider audience. 2011 was also the year he co-created the comedy podcast Your Mom’s House with his wife Christina Pazsitzky with whom he co-hosts the show. Segura also hosts the podcast 2 Bears, 1 Cave with fellow comedian and actor Bert Kreischer and the Spanish-language podcast Tom Segura en Español. A regular on the international comedy circuit, he has performed at the Melbourne International Comedy Festival, The Comedy Festival, the Global Comedy Festival in Vancouver, and Just For Laughs Comedy Festival. He released the stand-up albums Thrilled in 2010 and White Girls with Cornrows in 2012, and has four Netflix specials: Completely Normal (2014), Mostly Stories (2016), Disgraceful (2018), and Ballhog (2020).